Existing black-box attacks can be grouped into two main categories:

We propose a hybrid attack that combines transfer and optimization attacks: 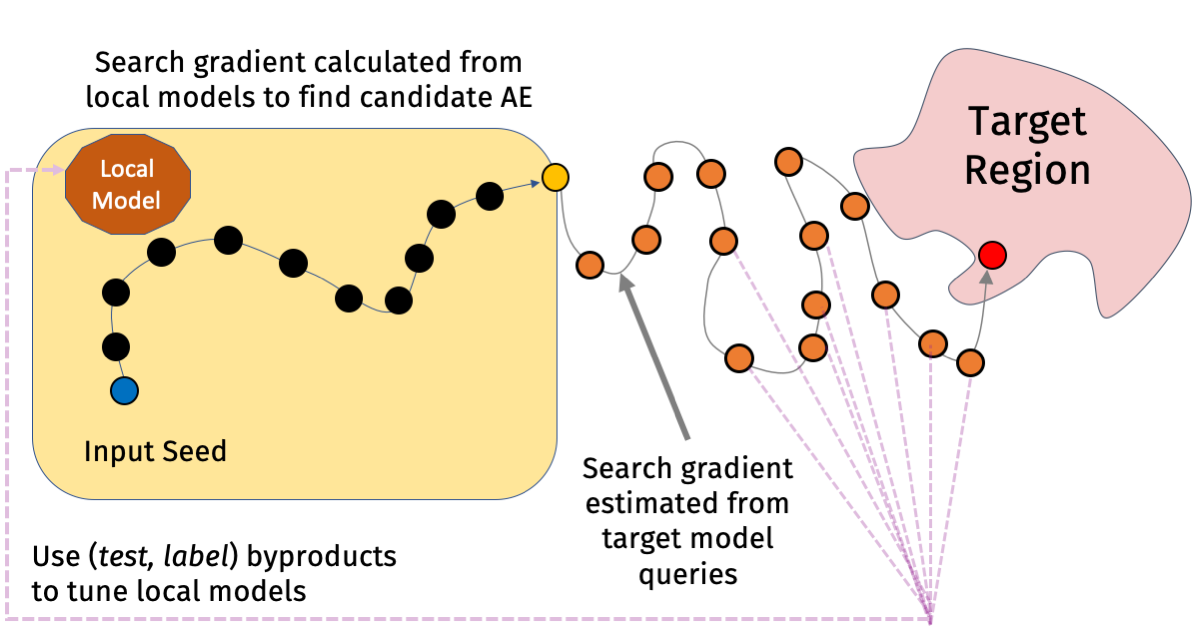 We validate effectiveness of the hybrid attack over the baseline on three benchmark datasets: MNIST, CIFAR10, ImageNet. In this post, we only show the results of AutoZOOM as the selected optimization method. More results of other attacks can be found in the paper.

Below, we compare the performance of AutoZOOM attack when it starts from 1) the local adversarial examples, and 2) the original points. Here, we report results for targeted attacks on normal (i.e., non-robust) models:

Local AEs can substantially boost the performance of optimization attacks, but when the same attack is used against robust models, the improvement is small:

This ineffectiveness appears to stem from differences in the attack space of normal and robust models. Therefore, to improve effectiveness against robust target model, we use robust local models to produce the transfer candidates for starting the optimization attacks. The figure below compares impact of normal and robust local models when attacking the robust target model:

Below, we compare the performance of AutoZOOM attack on MNIST normal model when the local models are 1) fine-tuned during the attack process, and 2) kept static: 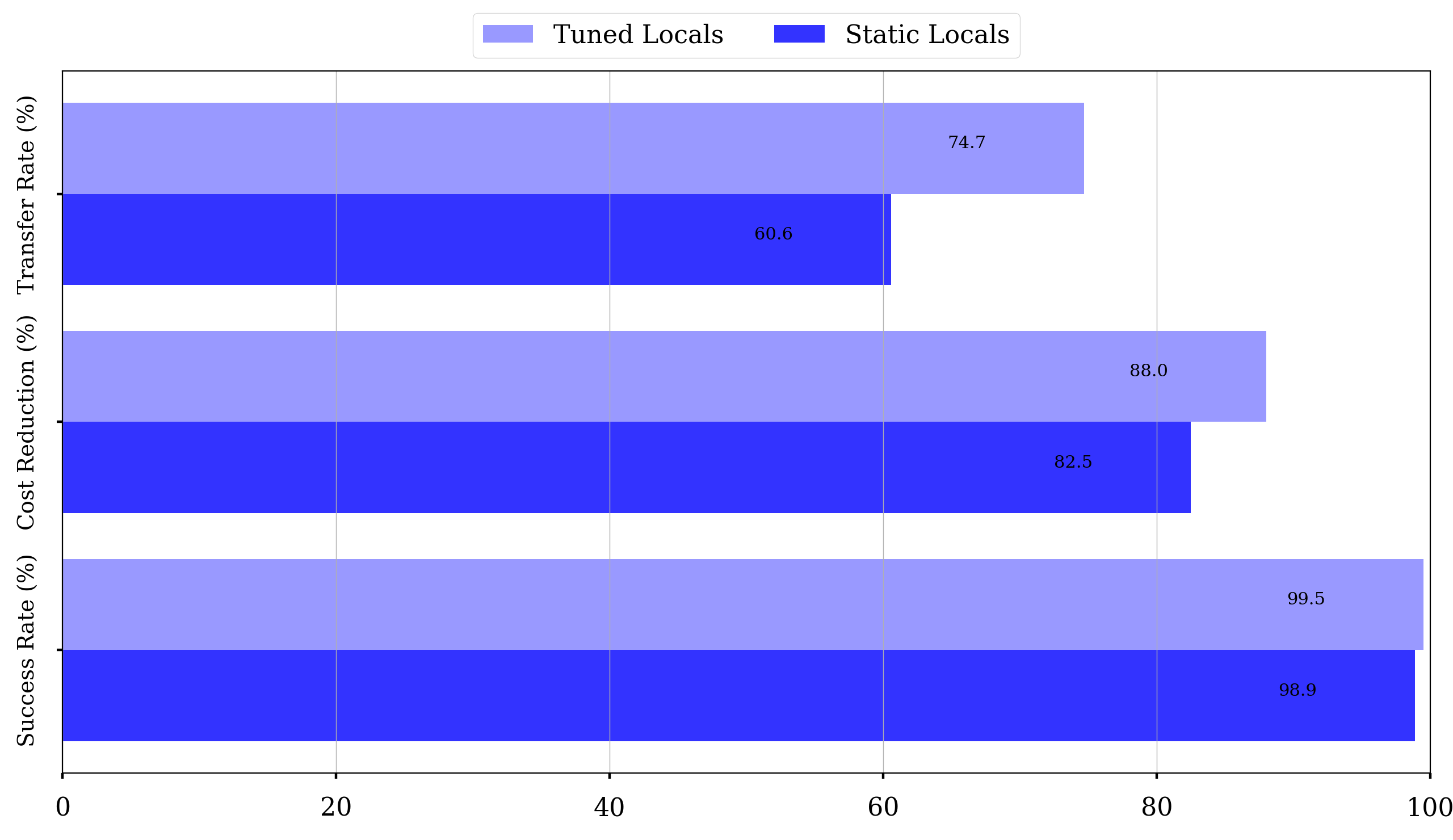 Tuining local models using byproducts from the optimization attack improves the query efficiency. However, for more complex datasets (e.g., CIFAR10), we observe degradation in the attack performance by fine-tuning (check Table 6 in the paper).

We consider a batch attack scenario: adversaries have limited number of queries and want to maximize the number of adversarial examples found within the limit. This is a more realistic way to evaluate attacks for most adversarial purposes, then just looking at the average cost to attack each seed in a large pool of seeds.

The number of queries required for attacking a specific seed varies greatly across seeds:

Based on this observation, we propose two-phase strategy to prioritize easy seeds for the hybrid attack:

To validate effectievness of the two-phase strategy, we compare to two seed prioritization strategies:

Results for the AutoZOOM attack on a normal ImageNet model are shown below: 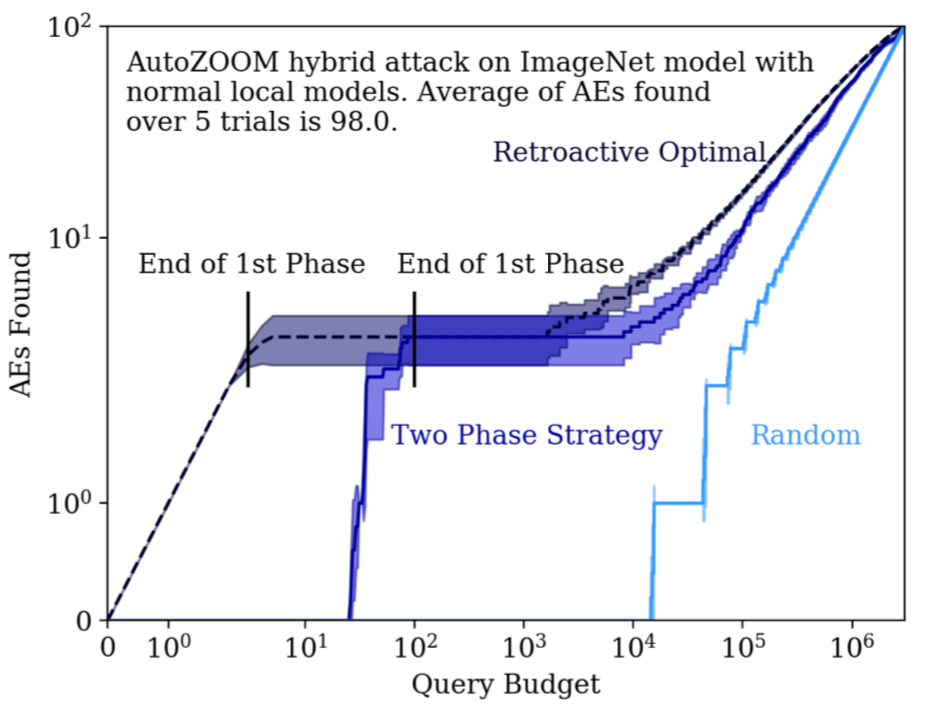 Our two-phase strategy performs closely to the retroactive optimal strategy and outpeforms random baseline significantly: with same number of query limit, two-phase strategy finds significantly more adversarial examples comapred to the random baseline, and is closer to the retroactive optimal case. (See the paper for more experimental results and variations on the prioritization strategy.)

Our results make the case that it is important to evaluate both attacks and defenses with a more realistic adversary model than just looking at the average cost to attack a seed over a large pool of seeds. When an adversary only need to find a small number of adversarial examples, and has access to a large pool of potential seeds to attack (of equal value to the adversary), then the effective costs of a successful attack can be orders of magnitude lower than what would be projected assuming an adversary who cannot prioritize seeds to attack.